Richard Jones, your guide for these entertaining and informative haunted tours of London, is a fully qualified and licensed Blue Badge Tourist Guide who has been conducting his acclaimed ghost walk around London since 1982, giving him the distinction of being London's longest established ghost tours guide.

He is also the best selling author of 22 books on the ghosts and legends of Britain and Ireland, and he has achieved international acclaim for his storytelling abilities, meaning that, when you join him for a tour, you are guaranteed an entertaining and enjoyable experience in the company of a guide who really does "know his stuff", and who is able to present his tours in a manner that achieves just the right blend of fascinating facts and chilling tales of the supernatural.

THE GO TO GUY FOR HAUNTED LONDON

Richard Jones has been researching and writing about the ghosts of Britain and Ireland for thirty years, and he pioneered such popular London tours as The Jack the Ripper Walk and the London Ghost Walk.

He was commissioned by the Sunday Express to select the top ten haunted locations in Britain and he also appeared with Michaela Strachan on Great British Ghosts on the Yesterday TV Channel.

Richard was contracted to select the top 13 haunted sites in London for the Mayor of London's Totally London campaign.

Strongbow cider employed his services to choose the top 10 haunted pubs in Britain as part of their "Bitter Sweet" campaign.

He is widely acknowledged as the best ghost walk guide in London with a track record that, literally, speaks for itself. 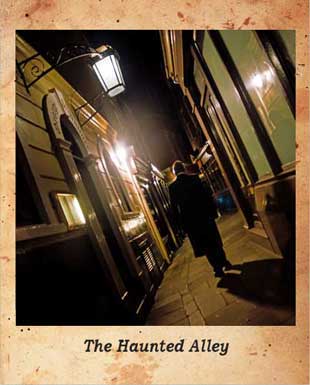 In addition he has written guides to Oxford, Cambridge, Edinburgh, Stratford, Bath, Chester, Dublin, plus as The Ring of Kerry and Dingle on Ireland’s west coast.

He is also the webmaster for the internationally acclaimed website Haunted Britain and Ireland, a region by region guide to the Haunted places of the UK and Ireland.

As well as his prolific writing output, Richard is also a regular guest on British television programmes. He has appeared on BBC1’s Breakfast News discussing the ghosts of Hampton Court Palace, the history and cultural significance of Halloween, and the ghosts of Britain and Ireland. He appeared on ITV’s This Morning, where he discussed the authenticity of the Hampton Court ghost caught on CCTV in October 2004.

He was featured on Channel Five’s Divine Designs discussing the impact that the Jack the Ripper murders had on the Spitalfields area, and even appeared on BBC 1’s Blue Peter on Halloween 2004, on which programme he told the chilling tale of the Bank Nun, for which he even received a coveted Blue Peter badge!

He has appeared several times on the capital’s main news programme London Tonight, leading many a reporter into the darker side of London's history to discuss the most haunted spots in the metropolis.

He has appeared on BBC Breakfast News discussing the origins and history of Halloween.

He also wrote and presented a tour of a haunted London house for Derren Brown's Science of Scam.

On New Years Eve 2003 Richard joined the team on Living TV’s hugely successful Most Haunted Live as one of the programme's resident historians. He went on to appear on nine Most Haunted Lives where he had first hand experience of investigations in places as diverse as an old World War 11 RAF base in Snowdonia; Pendle Hill in Lancashire; Derby Gaol; Elstree Film and Television Studios; Berry Pomeroy Castle in Devon (by his own admission one of the most chilling places Richard ever went to); and the National Coal Mining Museum in Barnsley.

Subject wise he has helped research the history of a wide range of characters whom the programme has covered, these include highwayman Dick Turpin, Witch-finder General Matthew Hopkins, and even William Shakespeare.

A REGULAR GUEST ON INTERNATIONAL TELEVISION

Richard has also appeared on the History Channel’s Haunted History:- London Special, for which programme he also acted as locations and historical adviser.

He braved the horrors inside the most haunted house in London (50 Berkeley Square) for the programme Haunted London, making him the only ghost walk guide in the capital to have been allowed inside the haunted room of this legendary house after night fall!

He was also interviewed for the Travel Channel’s Haunted Hotels.

THE JACK THE RIPPER TOUR PIONEER

It was Richard who pioneered one of London's most popular walking tours, the seven nights a week Jack the Ripper tour.

He appears on the DVD that accompanies the Johnny Depp film From Hell, discussing the legend and the identity of Jack the Ripper.

He was a presenter for the History Channel’s The Hunt For Jack the Ripper, in which capacity he took viewers around the Jack the Ripper murder sites.

He performed a similar role on the Travel Channel's It Happened Here Jack the Ripper programme.

Other television credits include The Discovery Channel’s Giants, Friend or Foe? On which he told the tale of London’s legendary giants Gog and Magog, and for which he also travelled to St Michaels Mount in Cornwall, to tell the story of Jack the Giant Killer.

He appeared on the History Channel’s Conquerors, discussing the events leading up to, and significance of, the Norman Conquest of 1066.

He appeared on Michaela Strachan's Great British Ghosts and, during the 2012 Olympics, he presented the Travel Channel's Hidden London and Haunted London specials.

On Christmas Eve 2017 he appeared on Channel 5's The 50 Greatest Christmas Films Ever talking about various film versions of Charles Dickens's all time classic A Christmas Carol.

In February 2018 he appeared on CNN's Great Big Story talking about the Victorian "knocker-uppers'; and, in March 2018, he began work on a new Jack the Ripper documentary that is due to air in November, 2018.

7pm From Outside The Lord Raglan Pub

THE JACK THE RIPPER TOUR 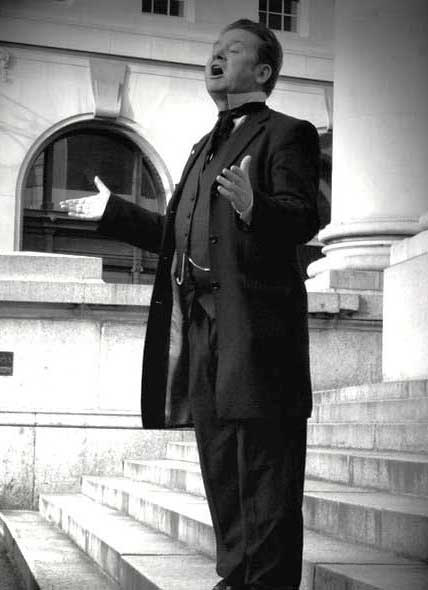 Richard's ghost tours are an integral part of the paranormal scene in London, and his track record, when it comes to all things spooky, paranormal, creepy and legendary, speaks for itself.

Indeed, Richard is London's longest established ghost walk guide with a track record that dates back to 1982.

When you join him for a walk you are greeted by a guide whose Victorian undertaker's garb - consisting of a black frock coat, black waistcoat and black cravat - oh and black trousers of course (!) - belies a friendly and approachable persona.

As well as being an accomplished storyteller, he is also a dab hand at lulling his audiences into a false sense of security, preparing for those moments when a sudden twitch or fiendishly placed scream has been known to make even the stoutest and bravest jump almost out of their skin!

With over 35 years in the business, he has honed his performance to ensure that his tours possess just the right blend of thrills and chills.

As well as being a leading figure on the London Ghost Tours scene for over 32 years, Richard is also the author of several international best selling books on ghostly and legendary Britain. 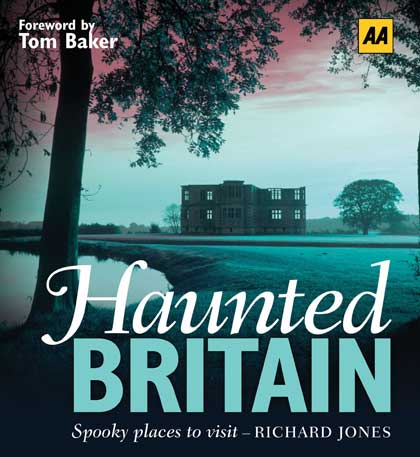 Richard has travelled all over the British Isles collecting ghost stories and researching folklore, and he has personally investigated almost 3,000 haunted locations.

No other London Ghost Tours guide can match this level of experience and knowledge when it comes to haunted history.

"It would be very hard work for some orators to keep the attention of such a large crowd in such foul weather. You carried it out effortlessly and with apparent ease. Your attention to detail - demonstrated in one instance by the simple task of picking up a cold, wet cobblestone and bringing it to life - was evident throughout the evening.

"...I've been on several of the London walks ghost walks. While they have been good, my favorite is actually not a London walks but Richard Jones...."

"I just wanted Richard to know that we had an absolutely fantastic time.

His passion and enthusiasm is what makes the walk so pleasurable. His historical knowledge of London and the buildings themselves add to the excitement of the stories."

Just a quick thanks for the entertaining ghost tour that my fiancé and I went on last night at 1900hrs, we thought Richard was very informative and had a great voice to listen too.

I hope you're well?

I just wanted to email to say a massive thank you for the tour last night...it was really interesting and you're a very captivating tour guide.

"I thoroughly enjoyed my tour with you Richard. You are a gifted story teller. And I will be sure to recommend this to any friends visiting in the future."

"Just wanted to thank you for the excellent Haunted London tour we went on in August.

I have been a fan since I purchased your Haunted Britain and Ireland book years ago."