A GHOST ON CAMERA

In 1982, photographer Chris Brackley took a picture inside this historic old church. The only people present were himself and his wife.

When the photograph was developed, he was astonished to note that a woman in old-fashioned garb was standing on the balcony to the right of the altar. 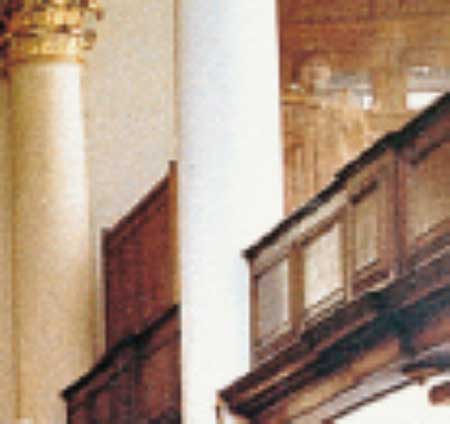 The negative was subjected to considerable expert analysis, which revealed that that there was no double exposure to the film and it was also proved that none of Chris's equipment was faulty.

The only explanation for the mysterious figure was that someone must have actually been standing on the balcony when the picture was taken.

A few years later Chris was contacted by a builder who had been employed on restoration work in St Botolph's crypt.

He explained that, in knocking down a wall he had inadvertently disturbed a pile of old coffins.

One had come open to reveal a reasonably well-preserved body the face of which bore an uncanny resemblance to the figure that had made an uninvited appearance in Chris's photograph.

Please note, the photographs on this page are publicity shots from my books Walking Haunted London and Haunted Britain and Ireland.

They are copyrighted images and they may not be reproduced in any way whatsoever.

All transgressors will be severely haunted by the ghost!